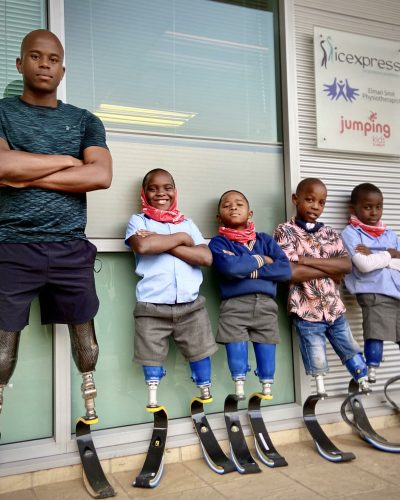 Born with fibular hemi-melia; a severe congenital condition that affects both legs from the knee down; Ntando Mahlangu spent the first ten years of his life in a wheelchair. That is before a bilateral amputation and access to prosthetics, school and sport changed his course.

In 2012, the year of the London Paralympics, a decision was made to amputate both Ntando’s legs through the knee. He was fitted with his first set of prosthetic blades at an event organized by Avis South Africa in collaboration with the Jumping Kids Prosthetic Fund and IceXpress Progressive Prosthetics.

With further support from Jumping Kids Ntando got the opportunity to attend mainstream school and participate in sport, specifically Para athletics to address his wish to be able to ‘just run’.

By 2016 Mahlangu had developed into a world-class para athlete; winning T42 200m silver for South Africa at the Rio 2016 Paralympics at only 14 years of age. He is widely regarded as ‘One to Watch’ on the Paralympic circuit.

In 2021 at the Tokyo Paralympic Games, Ntando won division gold for South Africa in both the long jump and 200m final events, also setting a new world record (7.17m) in the T61 men’s long jump division.

He aims to inspire more children to dream big and go for their goals, despite the challenges, by being a good example of what is possible with self-discipline, determination and hard work when we make the best of our opportunities.

Won silver with a new Personal best time of 23.97 seconds behind Richard Whitehead (23.03s WR) at the Muller Anniversary Games that took place in London (23 July 2016)

Won bronze in the under-16 400m and gold in the Medley Relay at the South African Sub-Youth, Youth, Junior & Under 23 Championships for ‘ABLE’ athletes in Germiston

Selected to represent Gauteng North at the ‘ABLE’ South African Sub-Youth, Youth, Junior & Under 23 Championships in the Boys under-16 400m and Medley Relay in Germiston

Won Gauteng North Sports Association for the Physically Disabled’s awards for Most Developed Athlete of the Year, Junior Sportsman of The Year, and Overall Sports Winner of the Year in 2015

Competed at the 2014 Nedbank National Athletics Championships where he blitzed to gold in the 100m with a time of 17.02 seconds and took silver in the long jump

In September 2012, Ntando is fitted with his first mobility solution at an event sponsored by Avis South Africa in collaboration with Icexpress Progressive Prosthetics and the Jumping Kids Prosthetic Fund

Before becoming a Jumping Kid I could not do anything and now, after receiving my prostheses I can do everything. That is the best thing for me.

Before I received my prosthetic legs my passion was soccer but that is not what I am passionate about anymore. Now all I want to do is to run to become the best Paralympic athlete I can be.

Message to children living with disabilities?

Remember who you are and where you come from and grab all the opportunities that come your way.