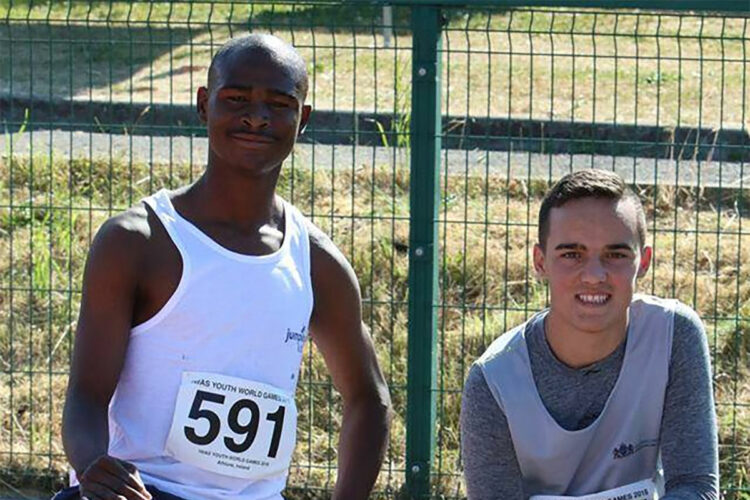 The event hosted 165 athletes from 16 countries in swimming, table tennis and athletics. It was during the athletics portion of the competition that Burgers and Mofokeng came up against some of the most promising young Para-athletes from across the world.

Burgers, who hails from Pretoria, has been a part of the Jumping Kids project since its launch in 2009. The grade eight learner won gold in the mixed classification Javelin under 17 male final with a distance of 42.43 meters. He also won bronze medals in both the Shot Put (7.61m) and Discus (23.98m) male under 20 finals.

This was Burgers’ second international competition, having also competed at the IWAS World Games that took place in Vila Real de Santo Antonio, Portugal at the end of 2017.

Mofokeng, on the other hand, competed at his very first athletics event, international or otherwise.

As one of five children, selected from SADC countries that included participants from Mozambique, Tanzania and Zimbabwe, Mofokeng was first fitted with his Ottobock South Africa sponsored running blades on 29 May this year.

Tebogo has been a patient at Dr George Mukhari Academic Hospital’s Orthotic and Prosthetic Centre, headed by Piet Motome Moopa, since losing both his legs at a young age due to complications following an accident involving boiling water.

A little more than a month after receiving his first sport solution, the young soccer enthusiast won bronze in the 400 meter under 20 male mixed classifications final. He completed his campaign by finishing fourth in the 100, and fifth in the 200 meter races at the Games.

“We have seen first-hand how access to sport helps children with amputations develop in an inclusive environment. It is our belief that, if more child amputees linked to government facilities had access to sport solutions, we, as a country and continent, would have a bigger pool of potential Para-athletes, while simultaneously giving these kids more opportunities to build their lives,” says Michael Stevens, Director of Jumping Kids.