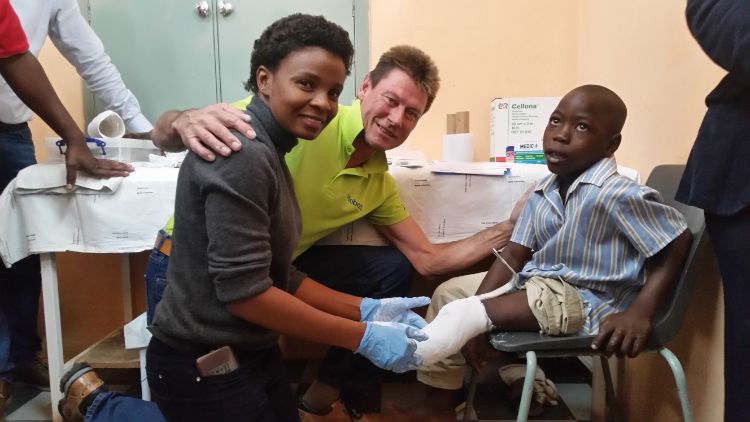 Ruth graduated with a BSc Degree in Prosthetics & Orthotics from Kilimanjaro Christian Medical University in 2013. Initially intent on becoming a medical doctor, she became intrigued by this ‘new field’ and decided to explore something different.

“When I visited the university for my applications, I found this interesting profession that was new and unique to me. Some influence went into my decision to select this career path.  One of my early mentors was my mother, herself a veterinary doctor, who encouraged me to explore something different so; here I am today,” says Ruth.

After qualifying, Ruth accepted a post as In-Charge Prosthetist/Orthotist at Comprehensive Community Based Rehabilitation in Tanzania (CCBRT); a health care organization that aims to prevent disability while also providing affordable medical, rehabilitative and aid services to empower people living with disabilities and their families.

It was through the organisation that Ruth was selected to attend.

Each invitee was asked to nominate a child from their region to accompany them to South Africa and go through the process of ‘being fitted with a sport solution’. Ruth selected Musa Hussein Msafiri (9), accompanied by his mother, to make the trip with her.

Musa, from Dar es Salaam, underwent a lower limb amputation after a road accident and had abandoned his dream of becoming an athlete having to adapt to the challenges of his new physical condition instead.

“I had worked with Musa for about nine months.  I first met him when his family went to the Regional Commissioner for help to no avail. I kept in touch and subsequently channeled Musa to my organisation’s poor patient’s fund. His journey began there and he is doing pretty well now,” she adds.

The training week followed a step-by-step ‘tutorial’ format to highlight the benefits of carbon fiber technology and its value for rehabilitating child amputees. It covered a range of topics; from data collection and residual limb assessment to the casting, manufacturing, assembly and final fitment processes involved to achieve comfort and efficiency.

“The week was good, intensive and it delivered exceptional results. I am encouraged by the new skills we learnt as well as the art involved. In working together, we achieved meaningful results. The experience allowed us to reap mutual benefits by interacting and assisting one another; a collaboration that provided everyone with equal opportunity to participate and communicate their ideas,” Ruth says about the training.

Once the kids were fitted, a sport day was incorporated at the University of Pretoria to illustrate the impact of physical therapy, athletics and other sport codes on the rehabilitation and integration process.

“The sport day was an eye opener.  I could see the transformation and positive impact that engagement through sport activities had on the lives of our young clients. It showed me that being a prosthetist does not have to become routine. There are so many other things which can be explored within the field and they are great.  It shows that changes within the project field of Prosthetics are possible”.

“The technology applied during the project can definitely benefit young Tanzanians.  It clearly has the ability to lighten up lives and will continue to do so since it shows that there is more to life after limb loss; more inclusion and engagement, no more low self-esteem. Through further training and practice, organizing sport events, and showing other amputees what it is possible, I believe we can help many”, she explains.

By the end of a fast-paced week, there existed a sense of camaraderie within the group and one common goal; to expand on the idea of making affordable prosthetic components and practices available to more South and Southern African child amputees and to collaborate again in the future.

“It is my desire to see the continuation of what was accomplished during the training week. I believe it’s a stepping stone for more success in the field of Prosthetics in Tanzania. My sincere gratitude goes to all who made it possible. South Africa is beautiful and our hosts were welcoming and friendly from the time we landed. It made me feel at ease through-out the week”, says Ruth.

“To kids living with amputation in Tanzania and everywhere, remember that everybody has a challenge and being different is okay. You can dream it, you can hope it, and you can make it happen,” she concludes.