Sphelele Dlamini is Living the Dream 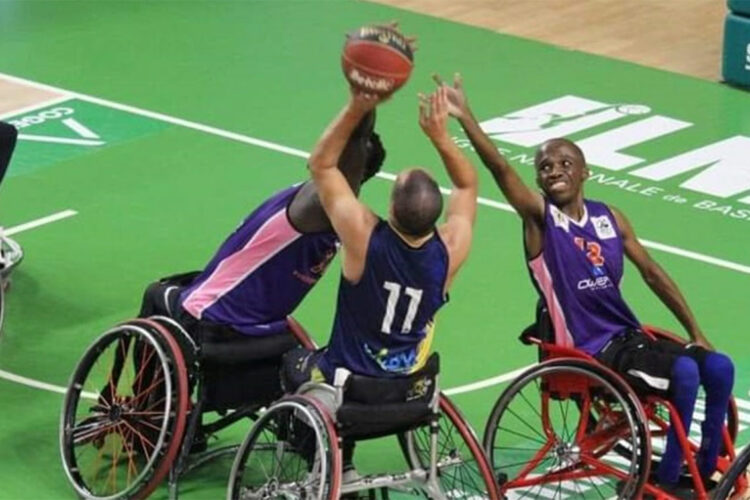 Jumping Kids Prosthetic Fund affiliate and role-model, Sphelele Dlamini had one overriding goal this year; to help his French league wheelchair basketball team, BCM Gravelines-Dunkerque, to get back on form for a shot at a higher division.

Sphelele; who hails from KwaZulu-Natal and first became involved with our Jumping Kids charity back in 2014, when he was a learner at Durban’s Open Air School; accepted a contract to join the French team early in 2022.

He is living his dream of being a professional wheelchair basketball player and is hoping to continue to do so in the years to come.

Describing himself as, “humble and soft-spoken with a love for God, family, friends and all those around us”, it is clear that it is his faith that lifted Sphelele through the tough times and helps him chase life’s opportunities with a humble heart and a vision to make a difference.

We caught up with Sphelele to find out more about this inspirational young man.

Sphelele Dlamini was born in 1996 with a condition that made it necessary to surgically amputate his legs, from below the knee, shortly after birth.

Growing up with his brother, sister, mother and her family in the township of Kwamashu near Durban in KwaZulu-Natal, he vaguely remembers when he first started walking with a walking frame and his first set of prosthetics.

“When I met the team from the Jumping Kids Prosthetic Fund, I had already been using government issue prosthetic legs for some years. The opportunity to have my prostheses custom-manufactured, as part of the Jumping Kids Open Air School Project, made a huge difference.  It became easier to get around and that boosted my confidence,” says Sphelele.

He adds that it was through this project that he met some of his favourite role-models.

“I have quite a few role-models. For me, they are the people with whom I have accomplished great things, people I greatly admire, such as Tyrone Pillay, Ntando Mahlangu, Michael Stevens and Black Coffee.

I am focused on being a good role-model myself. I hope that in the future I can do my part to make sure more differently abled kids get the opportunities I had, or to encourage more female athletes to take up Paralympic sport,” he says.

Now-a-days, in addition to his normal prosthetic set-up, Sphelele relies on Ӧssur’s ProFlex Foot system to get him around. He considers himself a proud Ӧssur family ambassador.

It is my goal to lead by example and inspire differently abled people from across the world by proving that nothing is impossible when we believe”, he says.

Sphelele was introduced to wheelchair basketball in Primary School. He fell in love with the game and has been playing ever since.

In 2016, he had an opportunity to play wheelchair basketball professionally abroad.

At the time, Sphelele could not afford the flights, visa and travel insurance necessary to take the contract. In 2022, when the opportunity to play internationally presented itself again, Michael Stevens from the Jumping Kids Prosthetic Fund decided to help make it happen.

“BCM Gravelines-Dunkerque had given me an offer to play for them. Like in 2016, I had to handle the visa application, flight bookings and travel insurance myself. That’s when Mike got involved. He made and paid for all the necessary arrangements on my behalf to make sure I can get to France!

I knew I had to go for it. It is not easy for a South African wheelchair basketball player to get noticed and be offered this kind of opportunity. In South Africa, we do not often get the chance to play on an international level.

I knew that, if everything goes well and I get the opportunity to play in France, I will gain valuable exposure and, if I do well, it gives me a better chance to get noticed for more opportunities to play professional wheelchair basketball in Europe,” Sphelele explains.

He received a warm welcome at BCM Gravelines-Dunkerque.

“I am impressed by the understanding the club shows for each player and the efforts made to make us feel cared-for, comfortable and at home. France is a warm, welcoming country. People are always willing to help and there is a lot of support. It is very advanced.

I would love the opportunity to play in a higher league in Germany, Spain or Italy. It is my goal to keep pushing to get recognised on the European wheelchair basketball circuit and to continue to play professionally. It is my further dream to play for South Africa one day.

I have a lot of plans and ideas that I would like to see through in the future. Doing my part to help more differently abled kids to get access to assistive equipment and inclusive opportunities is one of them.

For me, it is important to keep reminding the world that we are one big family under God.

We are all created by and belong to God, whether differently abled or normal. My focus is on loving myself and growing as an individual, to be the best possible version of myself and to pay it forward when the opportunity presents itself,” Sphelele concludes.