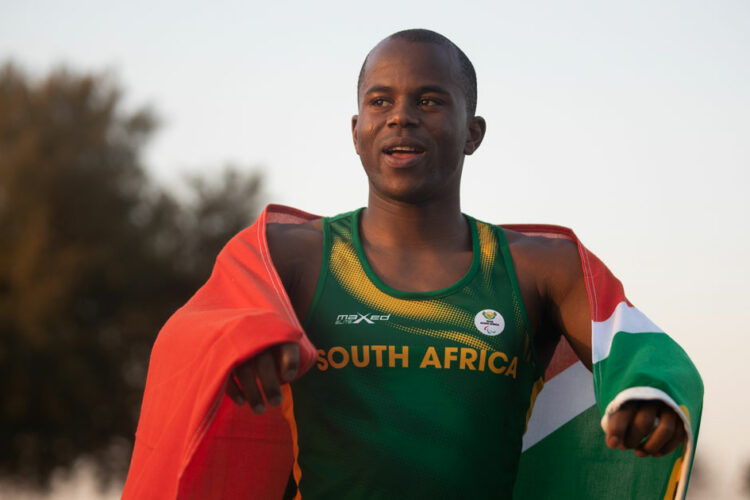 Among the medal winners was bilateral above-knee amputee and prosthetic device user, Ntando Mahlangu; a familiar face at The Innovation Hub Science and Technology Park since 2012; he won gold in both the men’s long jump T63 and men’s 200m T61 finals.

Mahlangu made global news after his surprise 7.17m long-jump win, the distance being a new World record in his T61 division. He dedicated the win to the people of the host country, Japan.

After the 200m race, social media lit up with commentary reflecting great national pride in the nineteen year old’s double Paralympic win.  He was lauded for his humility, professionalism and the sportsmanship he displayed throughout.

“I do not compete for myself. I compete for the people. It is bigger than Ntando Mahlangu. It is about creating a legacy for more athletes with physical challenges to get the opportunity to pursue sport at this level. I hope that my performance in Tokyo inspired all who watched and created better understanding about disability as a whole,” said Mahlangu after the Games.

Mahlangu is part of a roster of athletes associated with The Innovation Hub tenant, IceXpress Progressive Prosthetics; and its associated IsAbility Sports Club and Jumping Kids charity fund; which were selected to represent South Africa at the Tokyo 2020 Games.

James, a 35-year-old farmer from Makhado, took up track athletics in 2018 on advice from IsAbility Sports Club and Jumping Kids charity founder, Johan Snyders, who is also IceXpress’ Chief Executive.

She was born with cerebral palsy due to a lack of oxygen at birth and suffers from hemiplegia with impaired muscle functionality on the right side of her body. The challenges have not stopped her from excelling and she inspires others with her positive attitude.

Following a philosophy of, ‘go as hard and as fast for as long as you can, and when you fall, get up and go some more’, James has twice completed the Comrades Marathon in South Africa.

Sheryl  ended her Paralympic Games debut with a bronze medal for South Africa in the women’s 400m T37 final, lifetime best results in all three (100, 200, 400) of her sprint events, and new African records in her division.

“I went to Tokyo to run in a final race, to better my personal best record and to win a medal. I am so happy that I could reach all my objectives,” James told Maroela Media.

First introduced to Para athletics through a SADC project facilitated by the Jumping Kids Prosthetic Fund in 2018, Mofokeng finished fourth in the men’s 400m T62 final at his Paralympic debut, setting a new continent record in his division.

Like James, Mofokeng got through the heat rounds and lined up in each final (100, 200, 400) of his sprint events producing some lifetime best performances along the way.

“Tebogo is another success story highlighting the benefits of access to prosthetic equipment and holistic rehabilitative support. With financial assistance from our Jumping Kids charity, Tebogo was able to go from the dusty roads of Ga-Rankuwa to representing his country at the Tokyo Paralympics in the space of three years. We hope to see him grow as an athlete ahead of Paris 2024,” comments Jumping Kids Director, Michael Stevens.

Daniël du Plessis joined Mofokeng in the men’s T62 track line-ups for South Africa in what was also his Paralympic debut.  He shared inspiring words of reflection after the Games on social media where the conclusion was that the experience was ‘unforgettable and his performance good enough’.

“After finishing my 400m at the Paralympic Games, I did not experience an ‘It is finished’ moment. Yet, I knew I had to take my head off athletics for a while and rest.

I really needed the rest. I needed to be quiet. And I had to understand my WHY. And I do know, maybe better than before. I really do love running. And running when the world thought I’d barely walk, that is powerful,” Du Plessis commented on social media.

In the women’s javelin throw F38 final, sixteen year-old Simoné Kruger braved wet, rainy conditions to end her Paralympic debut in fifth place. The teen from Pretoria is widely regarded as ‘one to watch’ as the new Olympic cycle unfolds ahead of the Paris 2024 Games.

Back on the track, sixteen year old Puseletso Mabote, a beneficiary of the Jumping Kids Prosthetic Fund, proved that he has what it takes to perform well on the world’s largest Para sports stage.

The grade nine learner at King Edward VII School in Johannesburg produced inspiring performances in the men ‘s long jump T63 and, more notably, in the men’s 100m T63 heat rounds where he sprinted to a new African record in his division, to secure his slot in the final.

“We are extremely proud of our associated athletes for showing true grit in Tokyo and being exemplary in their conduct. Congratulations to Ntando on winning two gold medals, to Sheryl on her excellent bronze, and everyone who pushed hard to give it their best,” concludes Johan Snyders.

“Congratulations to all the athletes on bringing all the medals home, we are so proud of all the athletes achievements and also the work that our tenant IceXpress does in making sure that the needs and dreams of our young South African without prosthetics are realized”- Adv Pieter Holl, CEO of The Innovation Hub .