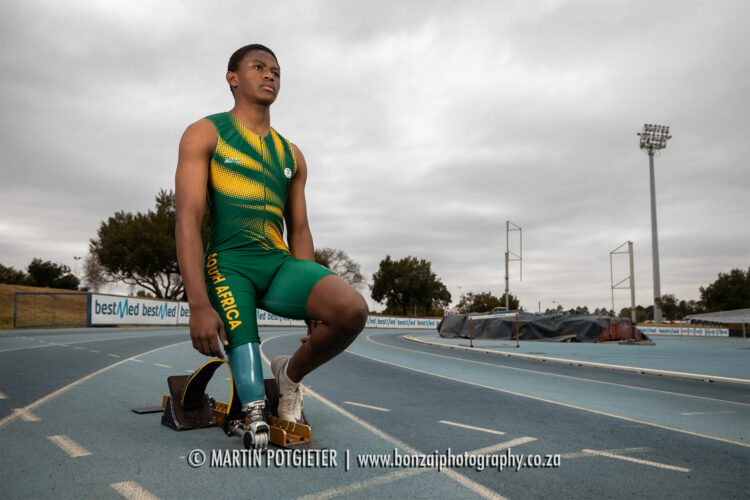 The team is a mix of experienced and emerging local Para sports talent, including five track and field specialists associated with IsAbility Sports Club in Pretoria, Gauteng.

In recognition of the athletes, The Innovation Hub in Pretoria hosted an event, in collaboration with resident precinct company, IceXpress Progressive Prosthetics, to officially hand-over the Team RSA Tokyo 2020 Games kit.

In 2016, only one athlete associated with IsAbility Sports Club Gauteng competed at the Paralympics in Rio de Janeiro. Now, five years on, Ntando Mahlangu is joined by four more club-members ready to make their Paralympic debut in Tokyo count.

“We are incredibly proud of these athletes selected to represent South Africa in Tokyo. Our gratitude goes to Athletics Gauteng North president, Hendrick Mokganyetsi, for including disabled athletes at able-body sanctioned events in the build-up. It helped to get our athletes back on form following last year’s lockdown,” says Johan Snyders, IsAbility Sports Club founder.

Bilateral above-knee (BAK) amputee blade-sprinter and Rio 2016 Paralympic silver medalist, Ntando Mahlangu says he is ready to “lead by example” in Tokyo. He will be wearing the green and gold for South Africa at his second consecutive Paralympic Games.

Mahlangu goes into the Japan Paralympics as a favorite to medal for South Africa. He holds the World Record over the 200m distance in his division, and is regarded as an important global figure promoting a shift in societal perceptions about disability.

“I feel well-prepared going into the Tokyo Paralympics. Now it is a matter of trusting the process and hark work that got us here, and then… remaining focused at the starting line,” says Mahlangu, a Matric learner at Afrikaanse Hoër Seunskool, Pretoria.

He adds that, for him, it is important to honour those who assisted and inspired him as a 10-year-old first-time prosthetic blade user. He does this by using his athletics success to help motivate the next generation to make the most their opportunities.

“It is exciting to see all the new talent starting their Paralympic journey. At the Rio Games, I actually had Puseletso’s name on my race prosthetics! At the time, the design on my sockets was a reminder of the team-effort it takes to get to this level. Now, five years on, Puseletso Mabote is headed for his own Paralympic debut. It is motivating to know that I help to inspire that,” Mahlangu says.

Mabote, like Mahlangu, got his start thanks to intervention from the Jumping Kids Prosthetic Fund; a South African charity organization launched in 2009 to address the need of children living with amputation without access to prosthetic equipment or rehabilitative support.

Mabote says that, after becoming a Jumping Kids beneficiary in 2013 and being fitted with his prosthesis; seeing the success of his team-mate, Ntando, at the Rio Games, inspired him to try athletics as part of his rehabilitation.

In 2019, at the World Para Athletics Junior Championships in Nottwil, Switzerland, Mabote set the new record in the men’s 200m T45-64 race; clocking 26.36 to slice 0.08 off the previous T63 mark set by the Japanese triple Paralympic silver medalist, Atsushi Yamamoto.

“It is a dream come true to travel to Tokyo to represent South Africa. Thank you to everyone who supports my journey, my family, and the team at Jumping Kids. I look forward to the experience, and to do my best,” says Mobote.

Another exciting new face on the international Para athletics circuit is 16-year-old Simoné Kruger. Kruger is currently top ranked in the Women’s F38 discus and shot put divisions and ‘one to watch’ as she chases her first Paralympic podium for South Africa in Tokyo.

Kruger, who has cerebral palsy, is a double world record holder in the Women’s F38 division and has gone from strength to strength as her Paralympic debut draws close.

She credits athletics with transforming her life, mentioning the added opportunity to see the world. But, although excited to meet new people from different sports codes at the Paralympics, winning the gold for South Africa is the main objective.

“At Tokyo we will also compete against the F37 class, who throw a little further than us in the F38 division. It is a challenge. If I want to get the gold, I need to add about four meters to my distance. That is a lot but there is still time to get there. I’m currently throwing 34.52m,” Kruger said in an interview this June.

With South Africa’s Olympic track and field athletes having concluded their Tokyo 2020 bid, it is now the turn of the country’s Paralympians to shine a light and promote national pride in a time that welcomes a return to sport.

“We are extremely proud to welcome our Gauteng Tokyo 2020 Paralympians for the official clothing hand-over. Johan [Snyders] and the team at IceXpress Progessive Prosthetics have been part of our business park since 2007. We are thrilled to help celebrate the world-class achievements of these athletes associated with its IsAbility Sports Club,” concludes The Innovation Hub’s Advocate Holl.