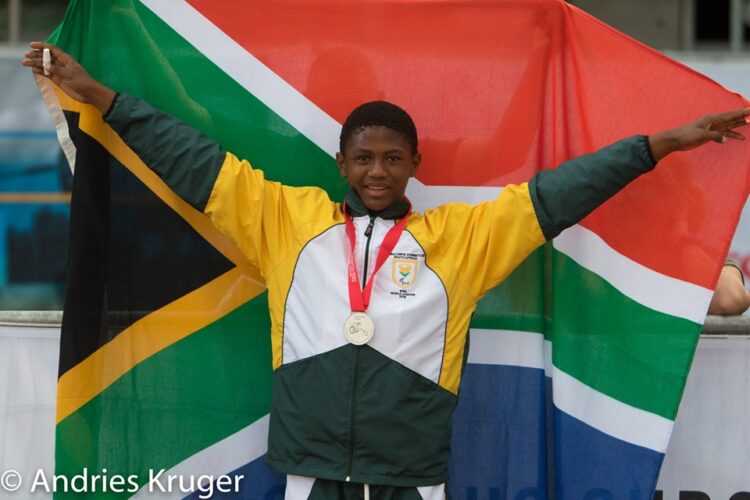 The team, consisting of some of the best U17 and U20 male and female Para athletes from across the country, brought home 22 medals; seven gold, 10 silver and five bronze; and set four out of the seven world records obtained at the event.

“It is encouraging to see so many young athletes coming through on the local Para Athletics scene. We look forward to creating more opportunities for our youngsters to compete internationally and I think the future, in terms of development towards the 2024 and 2028 Paralympics, is exciting,” says Team Manager; Johan Snyders.

Paralympian Ntando Mahlangu; one of only two South Africans who participated at the inaugural edition of the event back in 2017; set the pace with a T61 200m world mark (23.03) in the Men U20 T45-64 combined race. He continued to win 400m gold, and 100m bronze in his division.

“It was great to to be part of a big South African team and to meet young Para athletes from across the world. I am happy with my results. It was an honour to serve as team captain and I also enjoyed being a role model to the younger participants coming through,” comments Mahlangu.

In the Men U17 T45-64 division, fourteen year old Puseletso Mabote; who sites Mahlangu as his inspiration; ran to silver and a new T63 200m world record (26.36) on the first day of competition.

‘Blade-sprinters’ Paul Daniels and Tebogo Mofokeng; who hail from the Western Cape and Gauteng respectively and are themselves Jumping Kids ambassadors; both showed good form in the T62 sprints adding valuable points towards South Africa’s top five finish.

“We are grateful for the opportunity to assist more young athletes to compete at the highest level. This links to our vision that access to prosthetic equipment should translate into access to sport and, ultimately, access to better education and prospects,” concludes Jumping Kids Director; Michael Stevens.