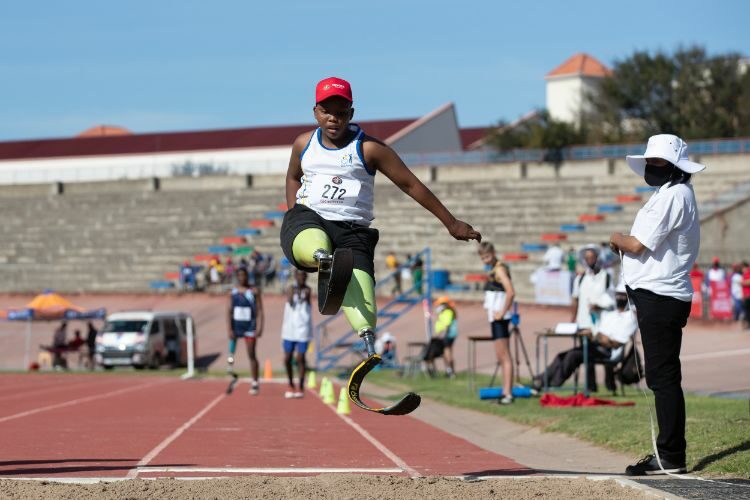 Pretoria, 30 April 2021 – This year’s edition of the Toyota SASAPD National Track & Field Championships, that took place in Gqeberha (24-26 April), re-ignited our ‘Passion for Paralympics’ on home-soil.

The event produced three World records, eight African records, and 44 South African records with the best Para athletes from South- and Southern Africa going for it at Westbourne Oval in a bid to achieve qualifying times and distances ahead of this year’s Tokyo Paralympics.

In the closest race of the championships, Paralympian Ntando Mahlangu (right) set a 200m Senior men T61 World record, clocking 22,94s, for a photo-finish win ahead of Mpumelelo Mhlongo, who betters his own World mark in the men T44 division with a 22,96s finish.

“It is an honor to finish along-side my team-mate and friend, Mpumelelo Mhlongo. I have been chasing a sub-23 for a long time so, I am thrilled to run it at this important qualifying event. I take my responsibility as Toyota Start Your Impossible ambassador, and being a mentor  for Jumping Kids, very seriously. This result is sure to make everyone proud,” comments the Rio 2016 Paralympic 200m silver medalist.

Athletes associated with Gauteng’s IsAbility Sports Club &/or the Jumping Kids Prosthetic Fund that set records are as follows:

Jumping Kids South Africa ambassador, Puseletso Mabote leapt to a new Long Jump u/17 men T63 (provisional) African record measuring 4,84m. He went on to run a 26.88 in the 200m u/17 men T63 for a new (provisional) SA record in his division.

He holds the 200m World record in this division.

She is one to watch on the road to the Tokyo 2020 Games and showing good form ahead of the Paralympics.

Both Daniel and Tebogo are actively involved with outreach work in their communities. The two are good friends and often train together.

IsAbility Sports Club’s Mandilene Hoffman, seen as one to watch on the ‘Road to Tokyo’, set a (provisional) Discus u/17 women F44 SA record measuring 29,61m at the Westbourne Oval in Gheberha.

That puts her amongst the top five in the world in her division.

Our original Jumping Kids South Africa ambassador, Emile Burgers (17) throws a whopping 51.13m in the Javelin Senior men F64 division for a (provisional) RSA record. He went on to win gold in the Shotput and Discus for Gauteng. Often said to be the spark that launched Jumping Kids back in 2009, Emile has been participating in athletics from the age of six.

After recovering from a tumble in the 100m race, Jumping Kids ambassador and former learner at Hope School in Johannesburg, Kim Macdonald leapt to a new Long Jump u/20 women T64 (provisional) SA record measuring 2,84m.

A well-known face in the women T64 division, Kim has been associated with the Jumping Kids since 2011 through its Hope School Project, that aims to assist lower limb amputee learners gain access to prosthetic equipment and holistic care.  Sport is seen as a valuable tool in the rehabilitation and integration process.

The youngest of the group, Kitso Mokolometsa (T61), our Jumping Kids champ that started high school at Pretoria Boys High School this year, set a (provisional) Long Jump u/17 men SA record measuring 2,78m. “I enjoyed my first national track and field event so much. The highlight was to see my role-model, Ntando Mahlangu, in that 200m race,” Kitso says.

On 23 June, the world Paralympic association (WPA) will let SASCOC know how many extra slots – in addition to the 10 already given to the country in athletics – South Africa can fill for the Paralympic Games in Tokyo.

Congratulations to each athlete, and everyone involved in putting on a magical event.

We cannot wait to see Team South Africa shine at the Paralympic Games, scheduled to be held in Tokyo, Japan between 24 August and 5 September 2021.