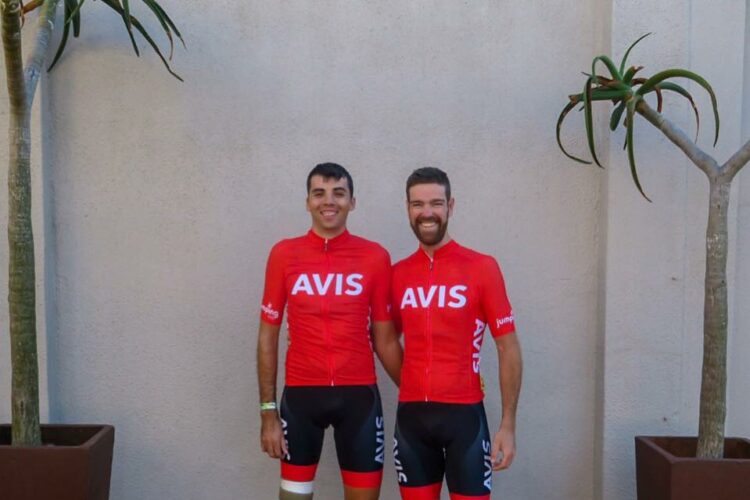 With the help of Avis South Africa, our ambassador Reuben van Niekerk and his ‘Team Driepoot’ partner Kevin Benkenstein is again taking on the Absa Cape Epic (18 – 25 March) to raise Jumping Kids awareness.

Reuben, who is going for his fifth consecutive Cape Epic finish, is himself an amputee having lost his leg in a road accident ten years ago. He understands all too well the value access to prosthetic equipment and sport opportunities can bring to the life of an amputee.

“For Avis balance in life is really important so their sponsorship of Team Driepoot is a symbiotic relationship with that of Jumping Kids. Kids need to realize that along with the gift of mobility and normality that is afforded to them by Jumping Kids, they can go on to live balanced lives and excel in all areas, including work, family and whatever sport they enjoy.

The media around the Cape Epic is huge. Taking part in this event is an opportunity for us to shine the light on Jumping Kids, thanks to the support from Avis,” says van Niekerk.

In 2016 Reuben made history by becoming the first person with any type of disability to finish the gruelling eight day mountain bike race for a third time, thereby becoming a member of the exclusive Amabubesi Club – awarded for three Cape Epic finishes.

Team Driepoot also topped expectations by ending among the top 400 finishers at last year’s event – an accomplishment they aim to exceed.

“It is difficult to put a number to it at this stage but ideally I would like to see us finish in the top half of the field. The format of the race has changed slightly and after the traditional prologue there are now four very long, but slightly flatter stages, which we think will suit us, since we are both bigger marathon style riders.

But in saying that, we don’t know what the terrain looks like so we will just have to handle it when we get there. I think that if I am able to ride my bike and we don’t lose time on portage sections, we should move up the rankings compared to last year” van Niekerk concludes.

Thank you Avis and Team Driepoot for making Jumping Kids part of this adventure. Here’s to another epic result.